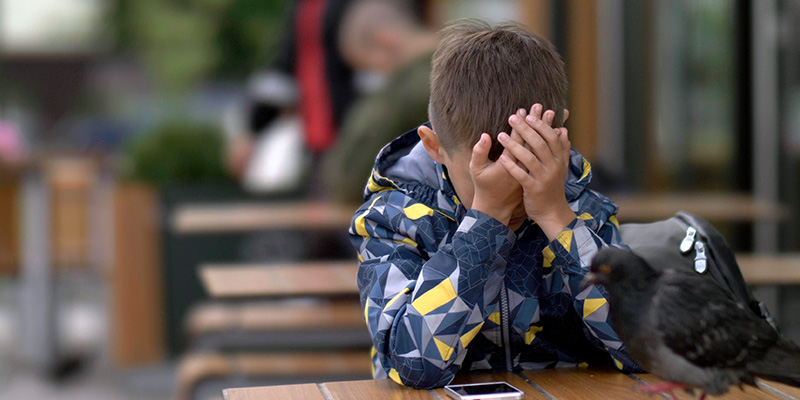 By Sara Ayllón, associate professor and Samuel Lado, researcher, the department of economics, university of Girona

Possibly one of the pictures that impressed us most during the first wave of the pandemic was one that went viral in social media showing school-aged children sitting on the street outside a fast food joint trying to connect to the internet in order to be able to do their homework. And while the picture was taken in a developing country, the reality is that also in Europe there are children that do not have access to a computer or internet at home. Yet, it was never more important than today: the outbreak of the coronavirus pandemic and the (total or partial) closure of schools around the world have meant that access to a computer and a fast internet connection is the difference between being able to continue with regular education or being pulled out of it.

The latest wave of data from the European Union – Statistics on Income and Living Conditions (EU-SILC) (released November 2020) indicates that, on average, in 2019, 5.4% of school-aged children (6-16) in Europe live in a household that does not have a computer and/or internet connection at home because they cannot afford it. They are digitally deprived.[1] The impossibility to acquire a computer because of the lack of money is the most prevalent problem affecting 4.4% of school-aged children while lack of access to internet is less prevalent affecting 2.6% of European kids.

Importantly, numbers at the European level hide substantial differences across countries. While in Northern and Continental Europe, as well as in the Baltic countries, the percentages of digitally deprived children are low – as low as 1.1% in Norway, 1.4% in Finland or 0.4% in Iceland, the prevalence of the phenomena is much higher in the Mediterranean countries, and particularly so, in Eastern Europe. In Romania, 23.5% of children are digitally deprived and in Bulgaria 21.1%. In both contexts, more than one in five kids are out of school when it moves online. Among the Mediterranean countries, it is in Spain where the percentage is the highest (9.1%).

Who are the digitally deprived children in Europe? Mostly, children  living in households that are in “severe material deprivation” which multiplies the risk of being digitally deprived by a factor of 7; that have low educated parents which multiplies the risk by 4; and that live below the poverty line which triples the risk. Other household characteristics such as being raised in a lone-parent household, with at least one parent or carer from non-European immigrant origin or in a large family are also associated with digital deprivation but not to the same degree than the other mentioned characteristics. Yet again, heterogeneity is large across Europe and certain household characteristics are very strongly associated with digital deprivation in some contexts but not in others which implies the need for policies tailored at the country level.

Finally, and considering the increased need of being digitally connected that the pandemic has imposed on children, we consider it to be very relevant to include at least one indicator of digital deprivation in the definition for “severe material deprivation” used to monitor the progress of European societies by the Commission.[2] While the existing definition considers very important aspects of children’s welfare, digital deprivation is left completely out of it.

Sara Ayllón and Samuel Lado are currently working on a new DigiGen working paper in which the digital deprivation of children in Europe is further analysed, based on the latest EU-SILC data. The new working paper is expected to be published on the DigiGen website in the coming weeks.

[1] Data relative to 2019 for Island, Ireland, Italy and the United Kingdom was not provided in the latest release. If we include data for these countries relative to 2018, the percentage lowers to 5.1%.

[2] A household is defined as being in “severe material deprivation” if their members can not afford at least four of nine of the following items: 1) to pay for their rent, mortgage and utility bills; 2) to keep their home adequately warm; 3) to face unexpected expenses; 4) to eat meat or proteins regularly; 5) to go on holiday; 6) a television set; 7) a washing machine; 8) a car or 9) a telephone.

This website uses cookies to improve your experience while you navigate through the website. Out of these, the cookies that are categorized as necessary are stored on your browser as they are essential for the working of basic functionalities of the website. We also use third-party cookies that help us analyze and understand how you use this website. These cookies will be stored in your browser only with your consent. You also have the option to opt-out of these cookies. But opting out of some of these cookies may affect your browsing experience.
Necessary Always Enabled
Necessary cookies are absolutely essential for the website to function properly. This category only includes cookies that ensures basic functionalities and security features of the website. These cookies do not store any personal information.
Non-necessary
Any cookies that may not be particularly necessary for the website to function and is used specifically to collect user personal data via analytics, ads, other embedded contents are termed as non-necessary cookies. It is mandatory to procure user consent prior to running these cookies on your website.
SAVE & ACCEPT